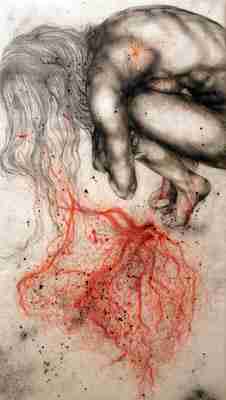 (born 1984 in Sofia – Bulgaria) is a contemporary artist who works in various creative fields, including works on paper, fine art, illustration and fashion design. Education: Liceo Classico “Beccaria”, Milan, Italy – senior high school specialized in classical studies , Accademia di  Belle Arti di Brera a Milano (Academy of Fine Arts Brera), Milan, Italy – BA of Fine Arts , First Class Honours . Through her drawings and performances, Emila Sirakova explores  themes related to the human body, the expansion of its own ego, the perception of itself and its emotions.The body is a creature, which tries to observe itself from the outside, in a variety of different poses, each one so tense and twisted as to remember the emotions of the moments when – huddled alone – it thinks,  broods, dreams, or tries to forget. This is a time when a human being  loses any contact with his own flesh and skin, and reaches to its own spirit made of undefined layers, spots and colors. In doing so, it even succeeds in detecting non-colors.In her creations, Emila adopts the intertwining of several layers of paper and drawings, similar to the streams of consciousness or memory; streams that are not always clear, appearing at times nostalgic and hazy, or coming out  of the mind as faded images, amalgamated with articulate and well-defined details.The Past is perceived as an ideal place, or the place of elsewhere, and it is devoid of  any precise characterization. It contains fragments of physicality, sometimes strong, sometimes barely implied, but always telling stories about the bodies that live and often dream, metaphysically crossing the line of reality.On one hand, the figures frequently express the subjective unconsciousness, the primordial feminine or masculine matrix, and on the other, the artist herself, her thoughts, her dreams and their extension, at times pleasant, at times dark and perturbing.The transparency of every picture simultaneously reveals and hides itself, and a few of the presented colors appear from the inside, undefined and blurred. Living and working in Milan, Italy since 1993